I think every time I read this passage I grow more perplexed by how all these events unfolded. Was Bathsheba purposefully bathing in David’s line of sight? Was she innocently relaxing after a long day, simply unaware of David’s gaze? Had David laid in waiting, anticipating Bathsheba to be on the roof where he could watch her? Or was it by happenstance that he just wandered into where he could catch a glimpse of her?

One of the reasons why we tend to feel that temptation is so difficult to overcome is because we don’t have a full grasp of the process we go through to get there. See, we often fall into the trap of believing that temptation into sin begins with action. The real process begins with a thought.

You see, the misbelief that the process of temptation begins with an action only sets us up for failure. We’ve already become so infatuated with the idea that not giving in doesn’t seem to be an option. If we identify the thought as the beginning of the process, we can defeat temptation before it grips us.

Our minds are incredible. It’s said that we can have up to 70,000 thoughts per day. How many of those are starting processes of temptation? And it doesn’t have to look like David’s. Maybe yours does. Or maybe it looks a little more like mine, in the temptation to compare myself to others.

Whatever your temptation is, the basic process is the same: your thoughts become your actions, which become habits, which then become behaviors, and eventually they become our way of living.

Whatever led up to the situation, David had a choice when he saw Bathsheba bathing on the roof. He could allow the thought to fester in his mind and ultimately become an action, or he could combat the thought like the attack from the enemy that it is and turn away.

David’s sinful fall into temptation led him down a dark path of adultery and murder. I’m sure he never thought it would bring as much destruction as it did. But the entirety of his sin was displeasing to God, and it all began when David was exactly where he wasn’t supposed to be. When he was supposed to be at war, David stayed in Jerusalem. He was operating outside of his calling as king, and this was ultimately the beginning of his sin. We are the same way – when we operate outside of our calling, we are more susceptible to the enemy’s attempts to sway us into his will rather than the Father’s.

When we step outside of our calling, when our thoughts are not under control, when we don’t call the enemy’s plays like we see them – this is when we find ourselves, a lot like David, with the overwhelming feeling that there’s no way out.

The temptation is too strong; I can’t resist…

Scripture tells us that we face no temptation that we aren’t capable of resisting. The bottom line is that God always provides an out to temptation. But we have to be on the lookout. The enemy is sneaky in his attempts to draw us in, and if we aren’t careful we will find ourselves further into the process than we ever thought we’d be.

If you find yourself in the process of temptation, just remember that Christ is our way out. Looking to him, you can find the strength for discipline, forgiveness, and redemption you need.

In Christ we have victory over the enemy. Every single time. 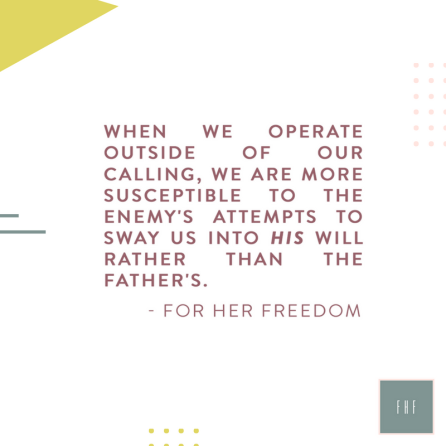